Our Products
Get a Quote
SANDTON WEATHER

with a vide range of packaging services. 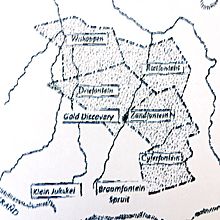 The three original farms, Zandfontein, Driefontein and Rietfontein, and later two additional farms, Witkoppen and Cyferfontein, upon which Sandton was founded.

Archaeological findings suggest the area, which Sandton comprises today, had originally been occupied by various indigenous groups, before European settlement, most notably the Tswana and, to a lesser extent, Sotho people. The remains of an Iron Age smelter was discovered in Lone Hill, a suburb of northern Sandton. One of the first Voortrekker parties to settle in the area were the Esterhuysen family on the farm Zandfontein (Afrikaans and Dutch for Sandy Spring or Sand Fountain). A monument to commemorate them may be found just off Adrienne Street in Sandown where the family cemetery is located. Zandfontein, Driefontein (Afrikaans and Dutch for Three Springs/Fountains) and Rietfontein (Afrikaans and Dutch for Reed Spring or Fountain of Reeds) encumbered what was to become Sandton. The municipal coat of arms of Sandton pays homage to the three farms with three round fountain barrels on its chevron.[5] In the late 19th-century the Wilhelmi family of Hannover, Germany acquired the farm Driefontein No. 3 while Rietfontein was owned by the Ehler family. The original Driefontein homestead, now within the confines of the Field & Study Centre, was looted during the Anglo-Boer War. The ruins are visible on the northern bank of the Klein Jukskei River. The Wilhemi family, upon return from Germany built the 'new' 1906 Driefontein Farmhouse on what is present-day Fifteenth Street, Parkmore cum Riverclub. The farmhouse served as the icon and headquarters for the now defunct Sandton Historical Foundation and is listed as a City of Johannesburg Owned Heritage Site.